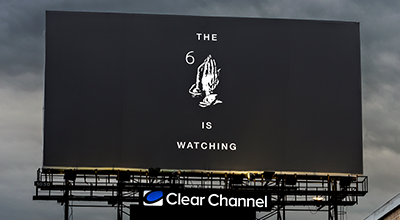 Did you see 2015’s most viral… BILLBOARD? Lucky for you, I’m here to tell you all about it.

Universal Music Canada bought a single billboard on behalf of their client, Drake.   It was bought for 28 days  aside Toronto’s Gardiner Expressway with just 3 words, a number, and a simple graphic .  The billboard below means the 6 God is Watching.  The phrase “6 God” and its accompanying iconography are symbols for Drake’s brand, recognized by fans. The “6” is his nickname for Toronto, derived from its area codes (416 and 647). The praying hands reference the prayer hands emoji, representing, in this instance, “God”—a humble allusion to Drake. The billboard is a subtle promotion for his upcoming album,  Views From the 6. Drake’s one-month, one-billboard media buy garnered more than 86 million impressions in a matter of days.

“That evening, [ November 4] the story went from kids playing with matches to five alarm inferno. Large media outlets published articles on the billboard, speculating about its enigmatic message. Camera crews and photographers were showing up at the billboard as though it were the site of a crashed UFO. Journalists and bloggers were calling the offices of Universal Music and Clear Channel Canada, asking for comment. Headlines like, “What’s The Deal With This Drake Billboard In Toronto?” and “Drake Posts Mysterious ‘6 God’ Billboard in Toronto” hit the homepages of Complex Magazine, MTV, and Billboard Magazine. Canadian television station CityNews covered the story on their primetime news program.” (http://clearchannel.ca/drake-viral-billboard/)

“According to a report commissioned by Clear Channel Canada and carried out by our friends at Sysomos, the billboard ignited a wildfire of earned media, totalling 86.72 million impressions in 7 days. And this conservative tally excludes broadcast television and much of the individual conversation within Facebook, whose recent API changes limit third-party access to data on content consumption within its platform. All tolled, impressions surely count well north of 100 million.” (http://clearchannel.ca/drake-viral-billboard/)

I know you’re probably be wondering how did this work? Is it because of Drake’s celebrity? No, not necessarily. This works for a number of reasons:

It’s pretty spectacular that a billboard garnered so much attention. I wish I would have come up with this brilliant idea.